For those who are tired of lying on the azure beaches of Sardinia and would like to learn something about the island, its traditions and culture, at the 6 and 7 July you’ll have a unique opportunity to see unforgettable extreme equestrian spectacle.

There is Feast of St. Constantine in the small town of Sedilo, located in the central part of Sardinia, at the Omodeo Lake, which calls Ardia.

This is an ancient ritual horse race. No one even knows how old it is and when it began to take place. There is an opinion that Ardia has appeared when the Church of San Constantine was built and perhaps even earlier. There is no competing in speed in this race, and nobody wins prizes. Ardia is a call to residents to do their sacred duty for The God. 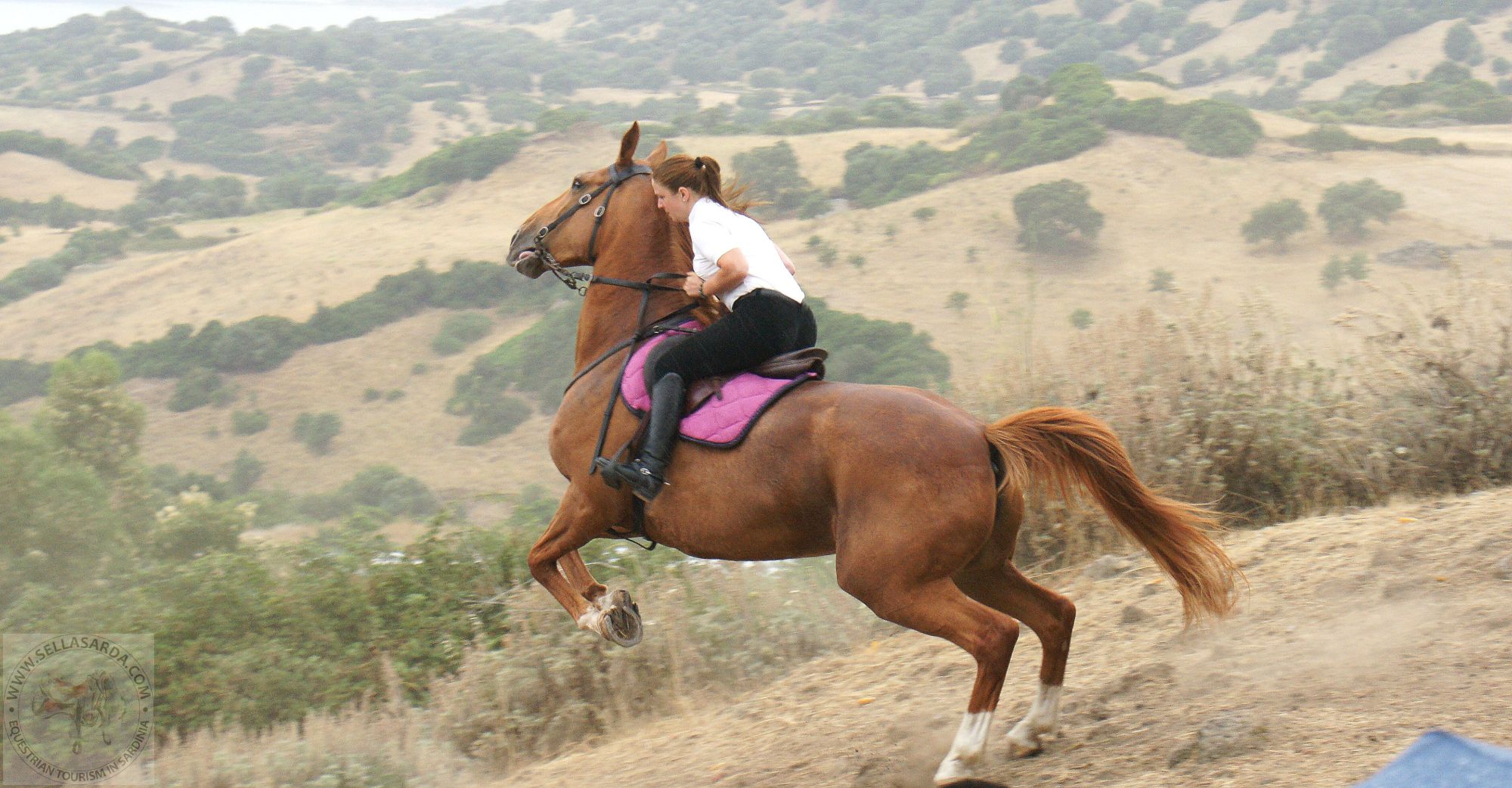 Valeria is a brave amazon, which brackes stereotypes that only men can participate in Ardia.

The act of the Feast symbolizes the battle of Emperor Constantine in 312 AD in the Battle of the Milvian Bridge, where he defeated Maxentius, whereby Christianity became the dominant religion in the Roman state.

It is very difficult to describe in words what is happening on the area of ancient temple “Santuario di San Costantino” where the Ardia takes place.

Hundreds of riders, dressed in white shirts, fly down from Mount Su Frontigheddu and at high speed enter through the narrow arch to run up to the church of St. Constantine. 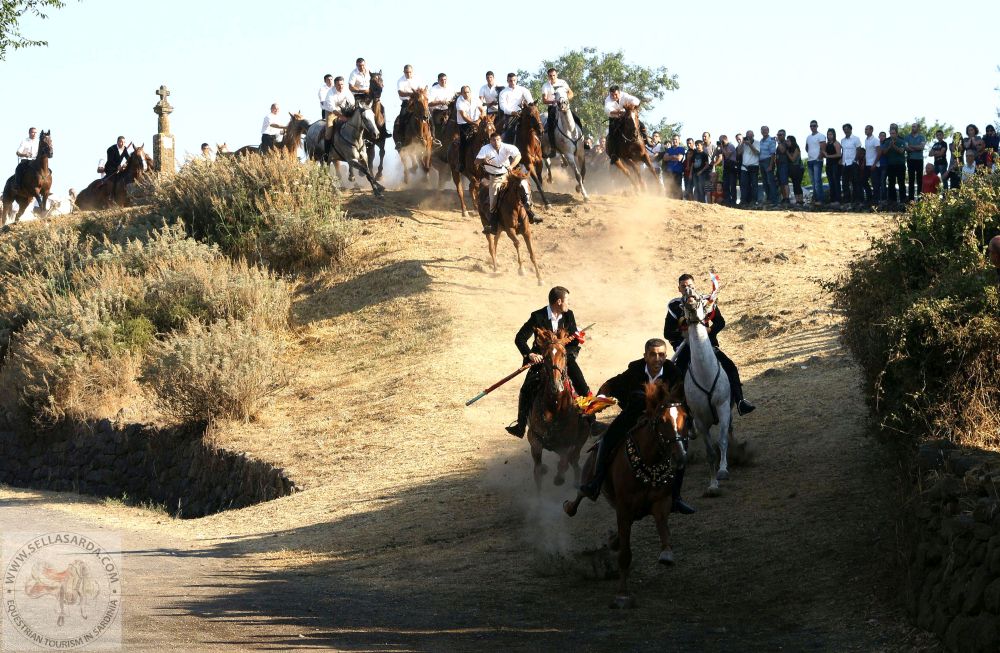 Start of the race from Su Frontigheddu

The action is so fast that in a few seconds, you cannot see the horsemen because of the dust. 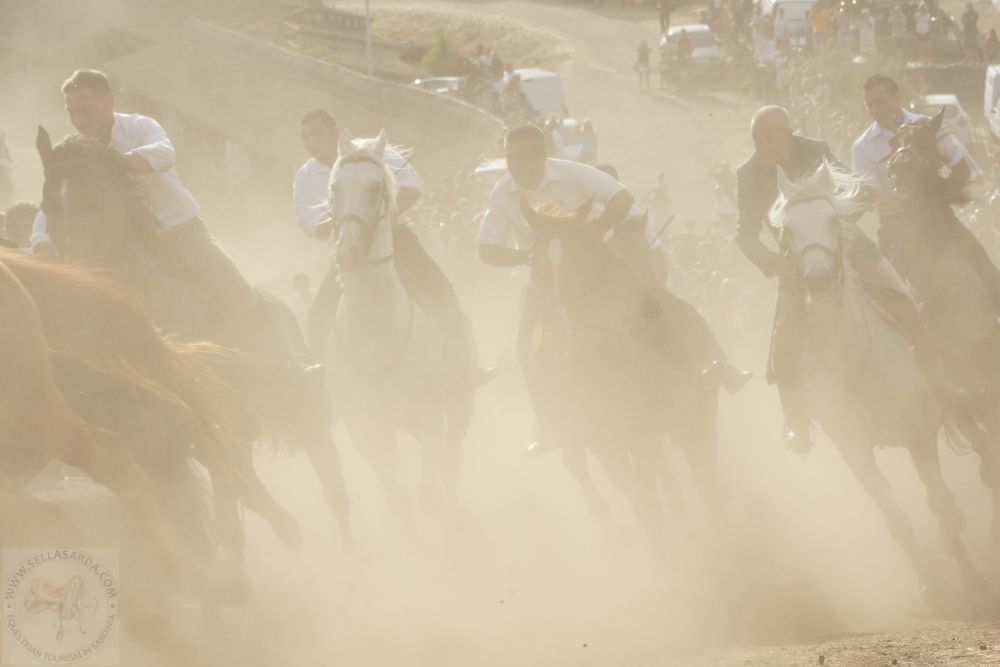 Race in the dust

This race is accompanied by sounds of the church bell and gunshots by armorers ( “fucileri”). These shots are warning the public about the approaching horses.

The riders walk around the church 6-8 times, it is the part of the ritual, and after that, they run down to the prehistoric circular altar “Sa Muredda”, where they repeat the rite circles around the altar, then they run up to the church again. 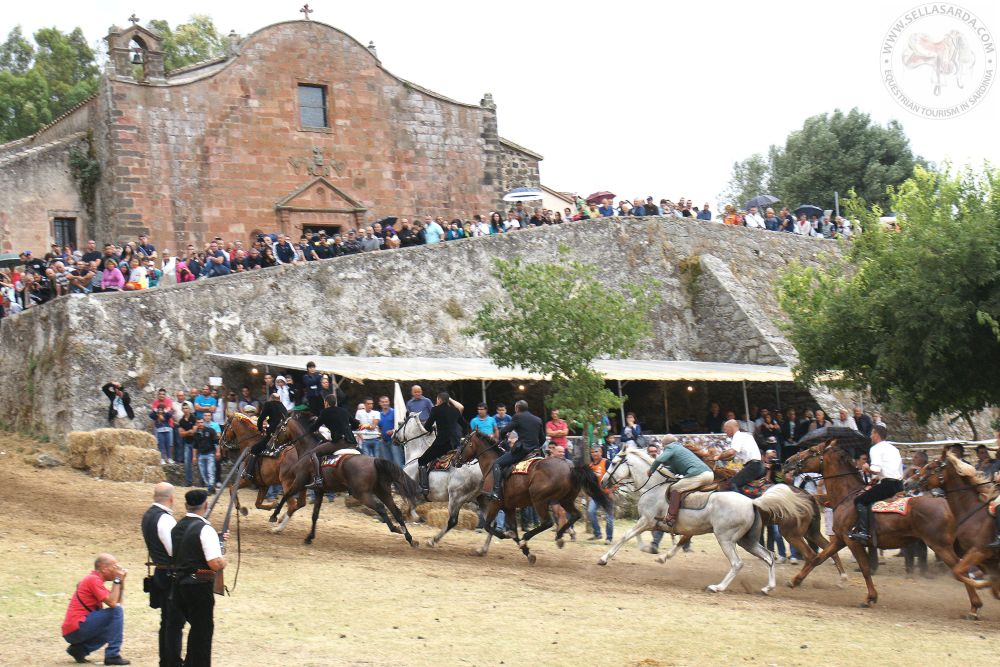 Riders run up to the church

When the race e finished they tie horses in the forest behind the church, and all go for the divine service. 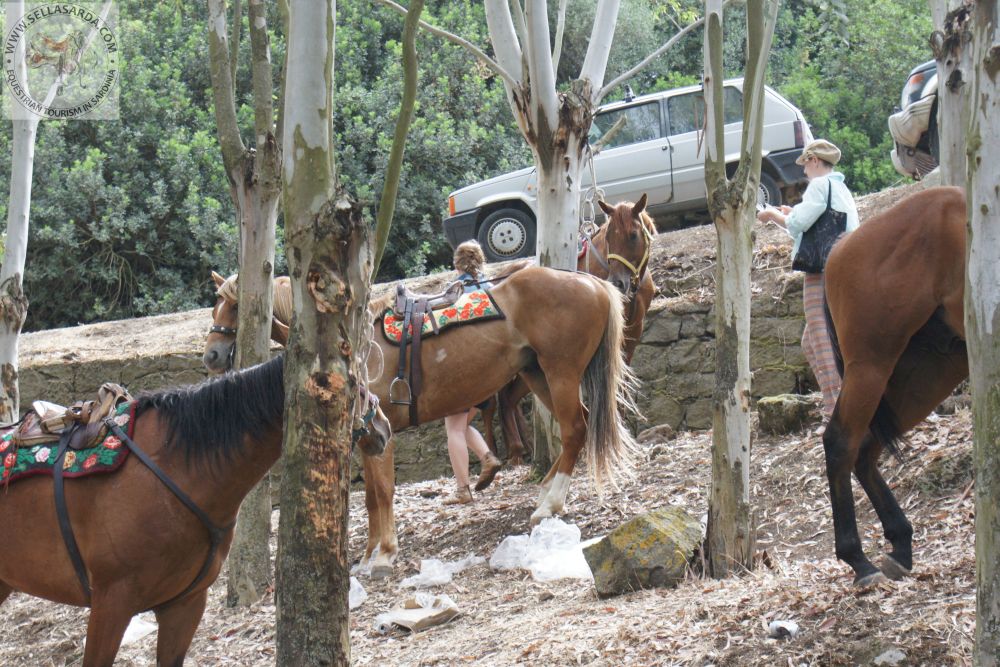 Horses during the divine service

There are no fences separating the crowd from the horses In Ardia. Horses gallop through the “tunnels” created by the people themselves. All the spectators become participants in the ritual. 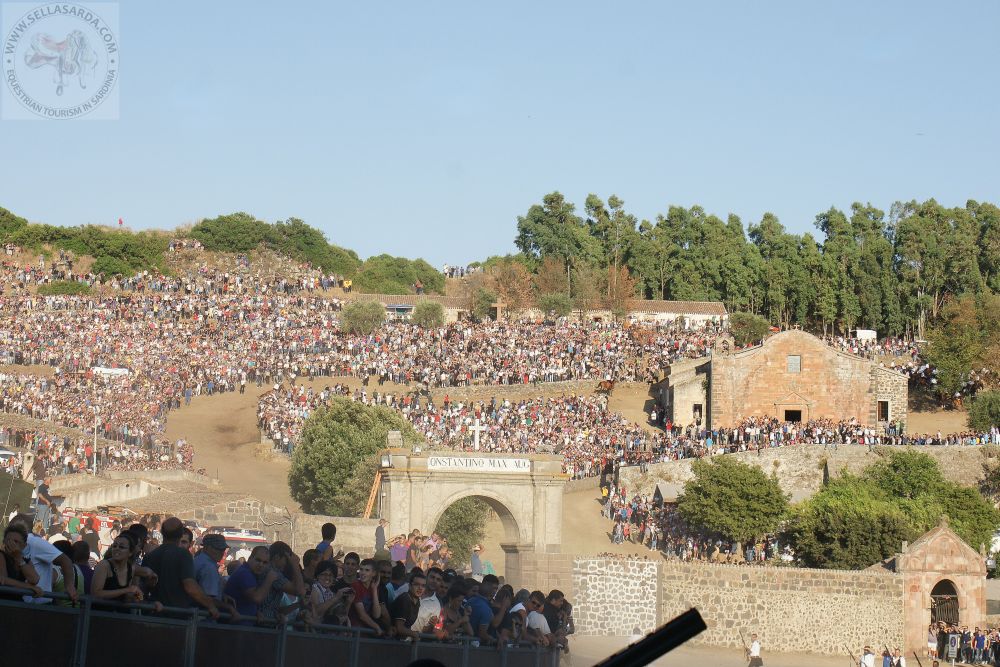 The temple of Saint Constantine at the 6th of July

Armorers “fucilieri” shot periodically into the air and yell at the crowd asking people to move from the track. 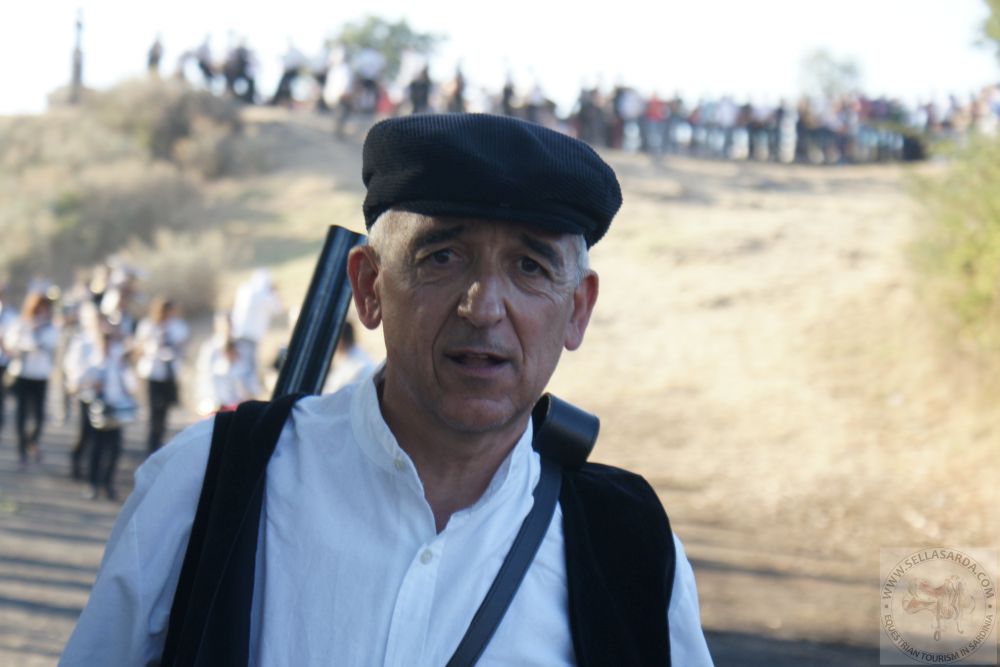 “Fucilieri” are responsable for the security

Every year the main hero changes. The priest of Sedilo selects the new Sa Prima Pandela at the beginning of each year. The name of the newly elected protagonist of Ardia is kept in a secret until the 15th of May, when the first horseman for the first time appears in public accompanied by his two close fellows: “Su Secondu” and “Su Terzu” at the Feast of St. Isidore. 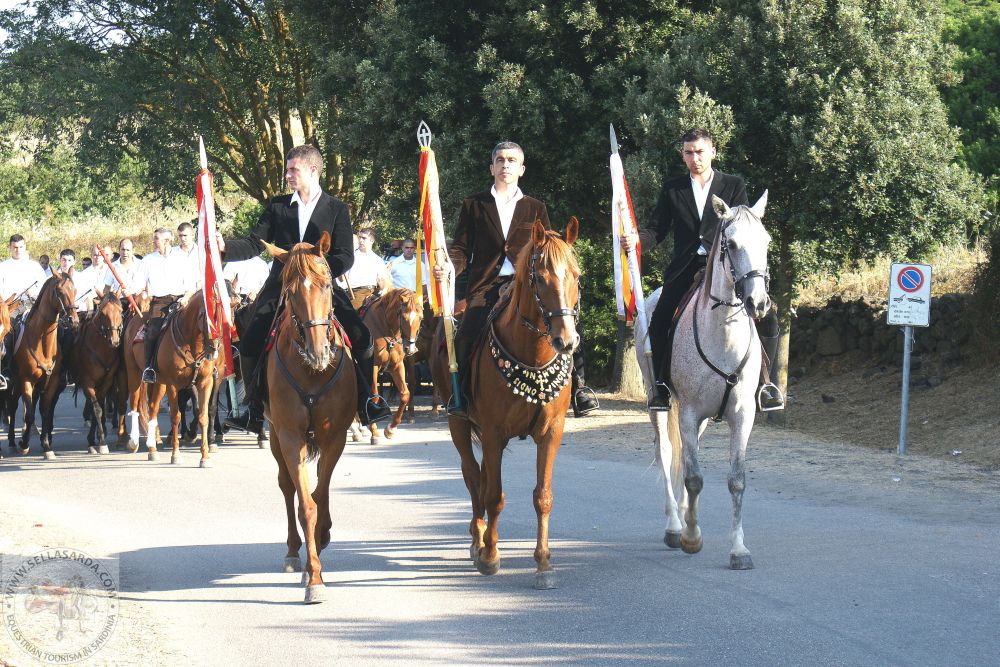 Three main riders. Sa Prima Pandela is in the middle.

Only people that were born in Sedilo town can participate in Ardia race. Many of them are not professional riders at all; they just keep a horse in the family to use it once a year to fulfill their duty for the St. Emperor Constantine.

The horse breed used in Ardia, is Sardinian Anglo-Arabian; these are strong and hardy horses. Most of them are bred directly in this town. These horses have already glorified in the famous Palio of Siena.

If you decided to visit the Feast, you have two possibilities to see it: in the evening at the 6th of July or at the 7th July, early in the morning.

The evening Ardia which is at 6th of July starts at 6 o’clock p.m. with the ceremony where the priest of Sedilo gives out the flags for the first three riders on the town’s main square (Piazza San Giovanni Battista). 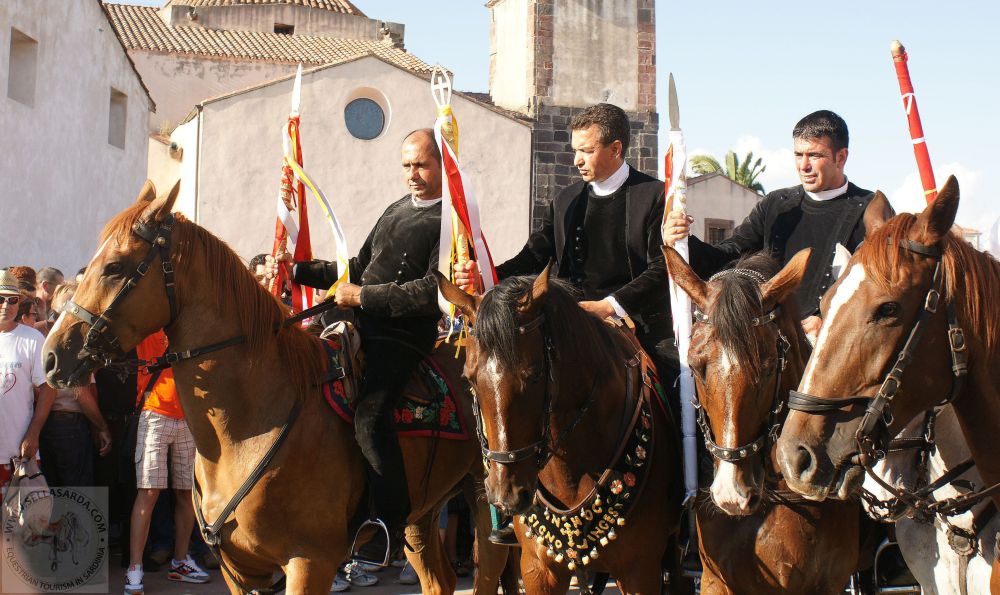 The ceremony of the giving out the flags for the first rideres.

Then, with an orchestra, the column of participants will move to the Temple. 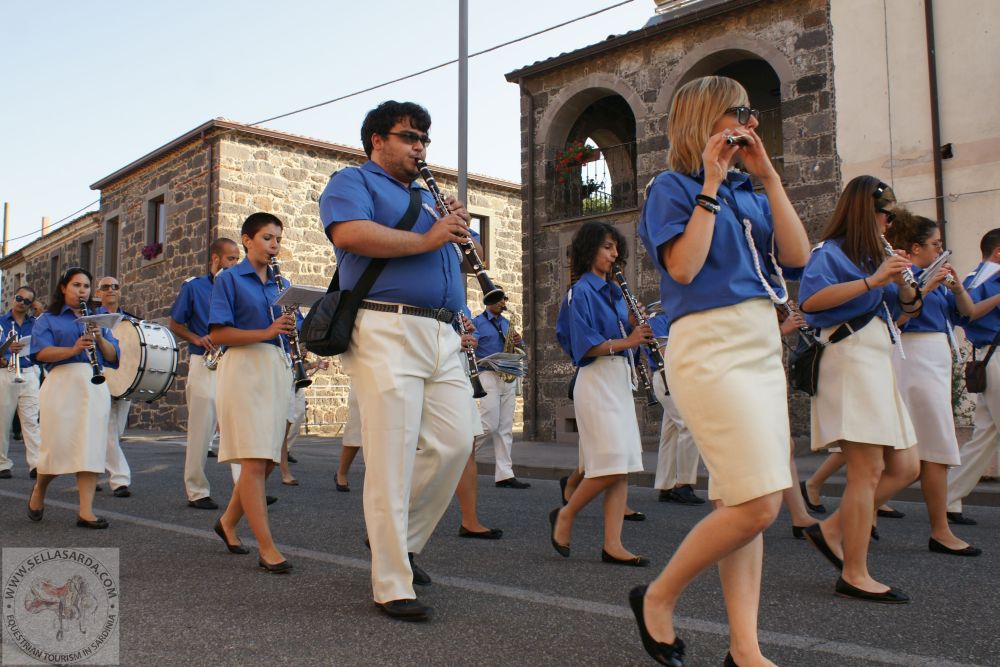 Orchestra accompanies the riders to the Temple.

If you’re interested in only seeing the race, you can to take in advance a safety place with a good vision and wait there the arriving of horsemen.

After the evening Ardia there is a big concert in the town with the participation of various Sardinian folk groups.

If you missed a lot in the evening action, because of the “chaos” and the crowds, you can make it up in morning Ardia at the 7th of July. The ceremony will start on the main square at 07.30 am. The morning race will be less crowded, so you will be able enjoy better the performance.

The Feast of St. Constantine finishes 7th of July with the evening procession, where is transporting the statue of Saint Constantine in a cart through the all streets of the city.

WARNING! It is not recommended to visit Ardia with young children, people with health problems, and also very impressionable guests. For your safety you will be responsible for yourself.

We wish you olnly good impressions!!! 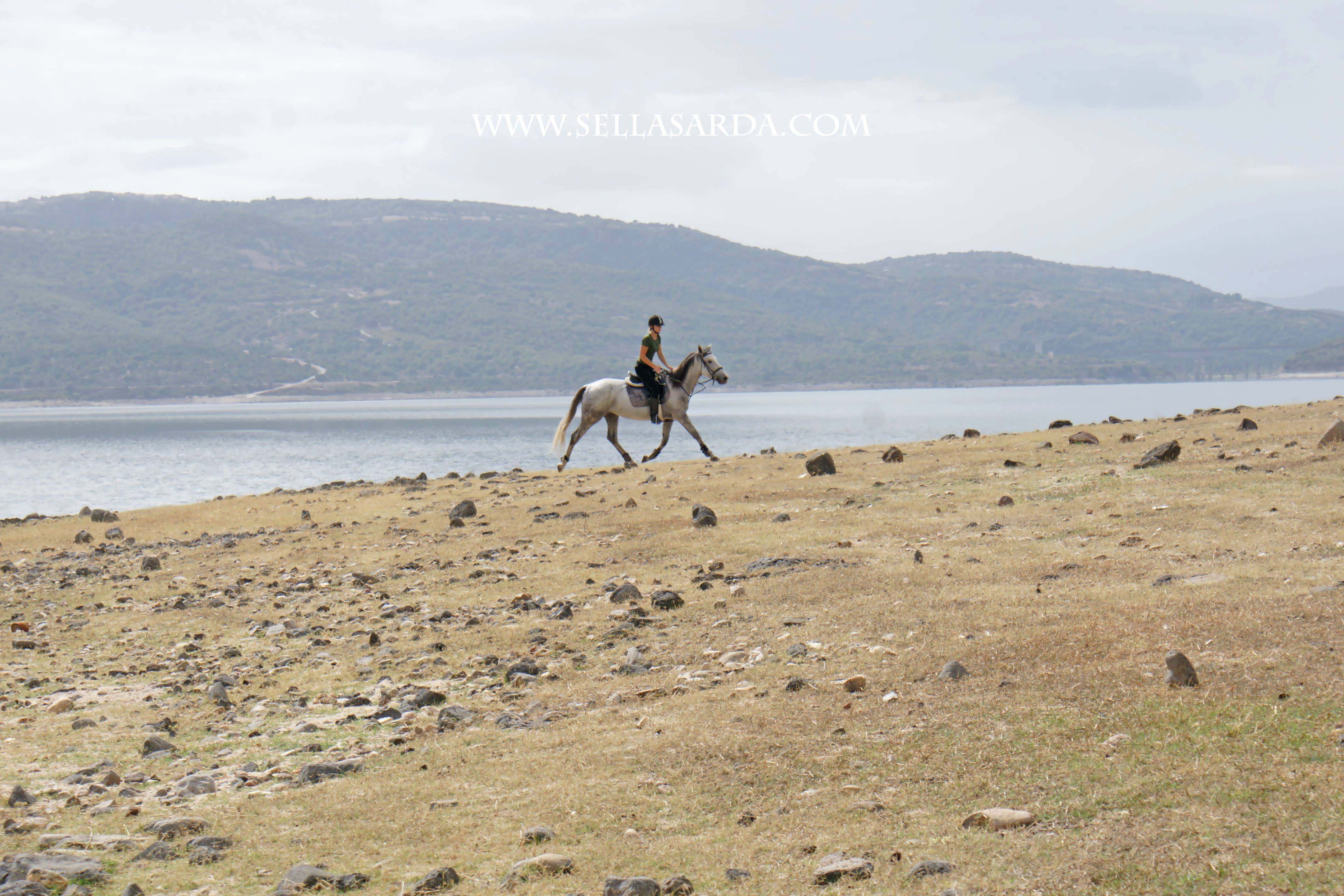 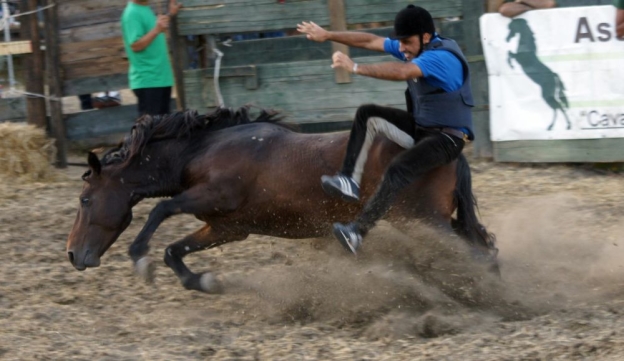